Education in schools should be holistic in its truest form. A child’s experience through the school system should cover the aspects of intellectual, emotional, social, cultural and political growth and knowledge. Yet, all too often, the curriculum does not demonstrate enough breadth or depth, or enough focus on equality and diversity.

For example, if we consider the aspects of British History it really doesn’t reflect the rich diversity of life that children experience. To help counter this, Scholastic launched ‘Voices’, a series of books that bring to life BAME figures from British History in gripping and authentic stories.

LitFilmFest Tim caught up with Emma Norry, author of ‘Son of the Circus: A Victorian Story’. Her book is based on the true story of Pablo Fanque, the first Black circus owner in England, and his son, Ted. Watch or read on below to find out more about her inspiration for the book and how it came about.

Tim: Would you tell us a little bit about the book that you’ve written?

Emma: Of course! I’ve written a book called ‘Son of the Circus’ which is part of Scholastic’s ‘Voices’ series. This aims to address the fact that Black people, and mixed race people, have always been part of Britain’s history, but we might not always be in the history books. I was part of that really great series and I chose to write about Victorian times.

Tim: British history is very white, isn’t it, it’s very Kings and Queens, so to have that celebrated, to think about not only a Black victorian, but a Black victorian who owned a circus, is a really interesting take.

Emma: I really enjoyed history at school, and I think history can be brought alive if it’s told well and engaging. What was so appealing about this project was that history was going to be full of people like me which was fantastic! So I knew that I wanted to do it based around a real person.

I remembered that a fantastic writer friend of mine called Jenny Spangler told me about Pablo Fanque ages ago. He was the first Black circus owner, born William Darby, in Norwich in 1810. He was a real character and so I dived down into some research and read about his life.

There was one book written about his life that I could find. He was immortalised in a Beatles song called ‘Being For The Benefit Of Mr. Kite!’ on Sergeant Pepper. He was a really amazing horseman, and he performed in front of Queen Victoria! His life just sounded extraordinary.

His first wife died in a tragic circus accident, his son Lionel was really upset with his Dad and stormed off a bit, and then there was a 20-year age gap between him and his next wife, and the other two children he had, Ted and George.

Tim: Ted is the protagonist?

Emma: Yes, Ted’s our protagonist, our hero. I started thinking ‘what if you’re Ted and you’re mixed race, and you’re living in Bradfield with your brother George and your Mum and your Dad’s never been around… what if one day this guy turns up on the doorstep and says “I’m your Dad and you need to come with me and learn how to be a man and carry on the family name and be in the circus…” and then what if you hate the circus…’!

I just had loads of questions that I wanted to explore and answer, and that’s what that’s the joy of writing to have those questions and to answer them or even not answer them!

Tim: You really want to take the reader on those journeys with you. Why do you think the Victorian time period is such an engaging time period for children to learn about?

Emma: Oh, it’s a period of such massive growth! Everything was happening; you’ve got the bicycle being invented, you’ve got steam trains, the first London underground was 1840 maybe, oh it just seemed so much progress! Obviously lots of terrible things, poverty and overcrowding and disease, but so many things were being invented and discoveries being made. The first photographs, the postal system!

I think there’s the macabre elements to the Victorian time period that a lot of us find interesting. The fact that children had to go down the mine, or they were working underneath machines that we find fascinating, and kids do as well.

We’ve got it very cushy now haven’t we? My son’s like, “why I gotta take my plate to the kitchen?” I’m like, “you’re lucky not down a chimney, Sam!”

Children were treated as little adults, working really hard. You could get sent to jail as a child, and then bullied and picked on by adults. It was really tough times.

Tim: We’ve had a question from Julie-Anne, who is currently finding Ancient Greece challenging to teach, she asks if there is a stage of history that you would find more challenging to write about, and you would avoid?

I don’t think there is… writing historical fiction for me was a new thing, but I knew that I would want to dive into research, and I would want to see photographs of grumpy looking Victorians. I knew there’d be more for me to read and see visually and be inspired, that’s why I chose Victorians. I would just have to be interested in the period of history.

From school I still remember those topics that really set my heart on fire so I was obsessed with the second world war for a bit, and Anne Frank’s diary really affected me.

I’d like to write about the Greeks and Ancient Greece, it was a time of massive opulence…

Victorian children had to work for their families. Are household chores fair today? Get your class thinking with this Quick-Fire Write activity!

What writing tips do you have for children who want to be authors?

I was always a massive reader. I do think it helps if you read a lot.

I don’t think it really matters what you read to be honest, I think there’s a lot of pressure to read certain books and that can really kill creativity.

I’ve got two kids; my 11 year old girl is not a reader, she’s an artist. Her favourite book of the last few years was The Boy, the Mole, the Fox and the Horse by Charlie Mackesy. Oh my word, she loves that and reads on a loop. I’m also exploring graphic novels and comics with her but she doesn’t really like story books.

She likes funny books, and Jamie Smart does brilliant comics that are really hilarious. Bunny versus Monkey, they’re hilarious, and Mr Gum was a big hit in our household. My son is a massive reader, and he’s just a year older. He’s 12 and he’s crazy about dystopia – I’ve let him read some things that maybe he shouldn’t have!

I think just reading anything. Literally, cereal packets and comics and newspapers and magazines and gaming.

Tips for the teachers that want to write, we need to tap into our inner kid. The biggest writing tip is just to be curious. Be genuinely curious in everything, in anything. Why? That’s our first question. Remember ‘why is the sky blue?’ Why, why? I think we just need to get back to asking why.

Tim: That’s great, and thank you Emma. I’m going to leave you now to go back to your lovely Victorian cottage…

Emma: Fantastic, thank you Tim! This was lovely, a real pleasure! I’m going to get my son out of the chimney, he’s been up there for quite some time…

Read an extract of Emma’s book and answer comprehension questions with this Quick-Fire Write activity! 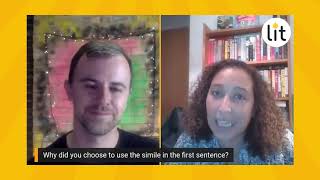