Dealing with the Darkness

Superheroes, or those that exhibit feats of incredible strength, fighting prowess and cunning can be traced back to myths and legends, scripture and early secular literature. In their more modern guise they have been portrayed in comics and books and through the medium of radio, film, television and more latterly in computer games. They continue to remain a popular feature in a child’s education.

However, there are some dark themes that flow beneath the glossy surface of Alyssa Hollingsworth’s latest book ‘The Invisible Boy’. It deals with modern day slavery. Hollingsworth says she thinks it is important for children to be introduced to darker themes, in a safe environment.

How do we deal with darker subject matter in our classrooms? Is fiction the safest place to tackle these ideas? Tim from LitFilmFest caught up with Alyssa to talk about her books.

LitFilmFest Tim: I have a real superhero with me! Hi Alyssa, how are you?

Tim: Would you tell us a little bit about your book ‘The Invisible Boy’?

Alyssa: The Invisible Boy is my second book it is about a girl named Nadia living in suburban Washington DC, who thinks that her neighbour friend might be a superhero. She sets out to investigate Lois Lane style, and discovers his secret identity is something very very different. So it’s a bit of a serious topic wrapped in a fun shiny cover!

Tim: How do you mix mystery and superhero stories in your writing?

Alyssa: Most superhero stories are mysteries, but we’re getting the perspective of the hero, so we the audience are kind of in on the secret. We know that Clarke Kent is Superman and we’re kind of laughing along as various people are like oh my gosh he put glasses on!

If you take that and then take someone else’s perspective, Lois Lane for example, she doesn’t know Superman’s secret identity and there’s a mystery just inherent in the story.

It’s a great combination and one that worked really well in this book which had a mystery at its core from the beginning, and then the superhero sort of angle came in and fit together really nicely.

Tim: You deal with some quite heavy themes in your book. Why do you think children are drawn to dark subjects?

Alyssa: I think that kids are more aware than adults might like to think about how serious the world can be. When kids sense that you’re trying to shield them from something, they like to push against that, and sometimes being more honest with kids is safer for them.

It’s better to introduce topics in a safe environment than to let them find out on their own and potentially be harmed. Truth was a big, big theme in The Invisible Boy. How much truth do we get to know, and what do we do once we know it? 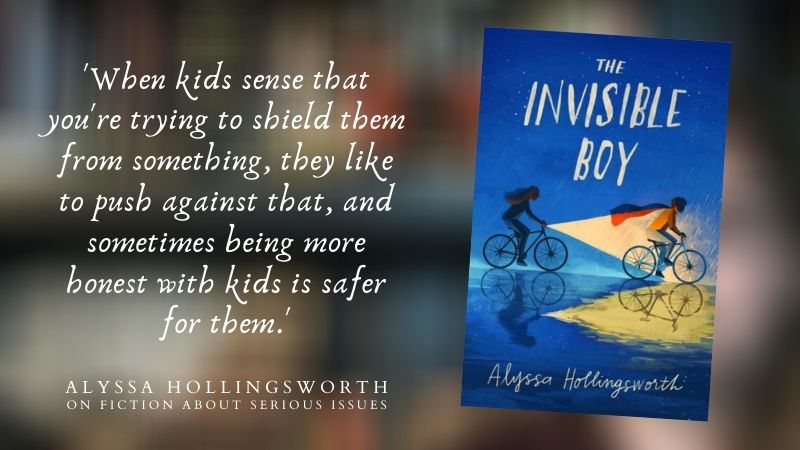 Tim: How do you write mystery, what’s your way of tackling it?

Alyssa: Hilariously, I never set out to write mystery, but I keep falling into it somehow! I like to know the answer whatever the big question is. I’m a huge plotter; my debut book has a scroll that’s almost as tall as I am that was my initial plot! This one wasn’t quite as intense as that, but I do like to know where I am at any given moment in the story. That helps me feel secure enough to actually get through the drafting.

Tim: When planning your characters, how do you ground them in something real or believable? Do you draw from experiences, or wider reading or a mixture of everything?

Alyssa: I definitely like to ground my characters in real experiences, whether they’re my experiences or friends or something I’ve read in non-fiction or articles. My first love was actually writing fantasy and so what I learned early is that in order to write magic you have to write reality, really detailed! That’s what makes magic feel real.

I took that over when I started writing contemporary; it’s the same sort of thing. I like to have touchstones of real stuff just so that I feel like I’m secure in my fiction. That hopefully comes across for readers as well. In The Invisible Boy, the street that Nadia lives on in Washington DC was the street I lived on from ages 11 to 14.’Paddle boy’ is based off of a real boy who was in my neighbourhood. Everything that Nadia travels to and from, everything from her street, to the museums, to paddle boys apartment are all real places that I walked and researched as I was writing. You could really find all of the stuff in this book in Washington DC. Except for Nadia’s favourite museum which has sadly gone out of business.

Tim: How do you start writing? What’s the process of taking a concept and actually filling a page?

Alyssa: My back story with writing is that my Dad actually read to us every night when we were kids even when he was working five jobs. I would carry on the tradition with me and my sister in our shared bedroom by telling her stories until we both fell asleep. About age 11 we changed and got our own rooms which was ‘yay!’ Except then I didn’t have anyone to tell my stories to so I just was talking to myself and telling them to myself out loud. So I started writing them down about age 12 and then never really stopped! 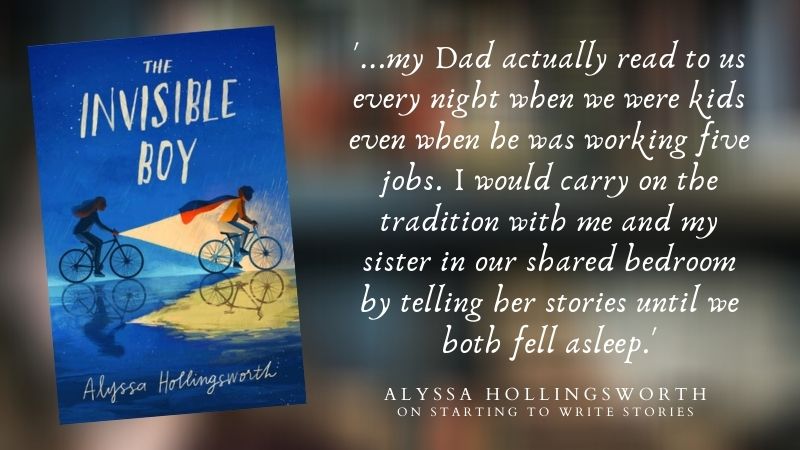 Today I would start a project by plotting doing a lot of work on characters. I keep numerous story notebooks that I paste pictures in and do colour-coded whatever… mostly to make myself feel like an eccentric writer. I don’t know how really useful it is. If there’s not a white board, I just write on the windows just to maximise the crazy. but I do lots and lots of plotting, and then try to draft really fast. Then I spend a lot of time rewriting.

Tim: Do you have any tips for the wannabe writing teachers out there?

Alyssa: My biggest tip is to set a timer when you sit down to write. Like I mentioned, I really do not like drafting. I do not like the first draft process, I’d much rather be rewriting or editing because then you can feel it coming together and you’re purifying it.

I hardly ever feel good about my first draft, so if I let myself I just procrastinate until I fall asleep. But, if you set a timer you’re racing a clock, and suddenly it becomes kind of a competition! How much can you do in 30 minutes? 45 minutes? There are actually a couple of online apps that I use when I’m really stuck that will help with this. One of them is 4thewords.com, which is an RPG where you fight monsters by writing words which is really fun, and I highly recommend it for kids.

Tim: Thank you so much for joining us, it was absolutely wonderful to have you on, Alyssa.