Writing in the Classroom, Books and Superhero Fiction

What young child doesn’t dream of having a superpower and being a hero? The power to be invisible; to fly; to have the strength of many, or to bring peace to the world. Much children’s fiction centres around characters having powers like these, being used for good against evil. Where the ‘baddies’ get it and the ‘goodies’ save the day. LitFilmFest had the chance to talk to author J. M. Joseph about his writing journey.

The structure of a story like this builds excitement, anticipation, action and a feel good sensation at the end. But crafting these stories takes poise, planning and of course creativity.

So, the hero has the power to be invisible, but does this make everything they touch become invisible? Do they leave a shadow? Do they still make sounds that can be heard? Can they move through things?

Complex questions perhaps, but certainly ones the young readers will think about and test when reading. Any hint of not being authentic or believable and you have lost your audience. It is these minutiae details that need to be woven into stories so that readers get a sense of just how the invisibility superpowers really look.

Children are also regularly curious about how these superheroes live in the normal world when they are not doing their thing. Do they look the same? Do their superpowers get in the way of living a normal life? Bringing the human element to such stories fuels young minds into believing that superheroes exist.

Creative writing is the art of leading others on the journey of their imagination, guided by carefully crafted words and descriptions. Let’s take responsibility for inspiring the next generation of creative writers.

LitFilmFest Tim interviewed author J. M. Joseph about his new superhero book ‘Fire Boy’ and his journey from teaching children in the classroom to writing for them.

Tim: Welcome Jay Joseph, how are you?

Jay: I’m very well, thank you for having me on, I’m really looking forward to it!

Tim: It’s a real pleasure! We are going to be discussing superhero fiction, and you’ve written your own superhero book? What was it that made you want to become an author ?

Jay: I always wanted to be an author long before I wanted to be a teacher! I kind of fell into teaching a little bit by accident. I’ve taught children as young as three, I’ve been a tutor at university and for the last 15-20 years I’ve mostly focused on key stage one and two and three so I’ve been mostly limited myself to primary but wanting to write has always been something I felt was something I could do.

Every summer, like a lot of teachers, I used to try and write something but I never really shared it with people. I think the difference was in workshops  taking your writing out to people, letting others see it and getting feedback. Once you have an audience that was the real spur. That’s what really got me writing.

I think as well it was having deadlines. You realise how much you can produce when you give yourselves timelines.

Jay: I think you have to be fair to yourself first of all. If you want to be a writer you are already a good reader – I’ve read lots of books, but what you write those first few times isn’t going to be that great. As a reader can see that, and I think what you have to do is be a little bit charitable yourself, and realise it is an apprenticeship, that’s what writing is. You just have to put in the hours, you have to work on it. There are a few people who can just do it from a very early age, but for many of us, it’s something you really just have to put the time in from the start – so be charitable to yourself!

Tim: Did it take longer to write the book because you were so busy teaching in school?

Jay:  I took one day off a week and that that helped a bit. I’m still teaching now, but I’ve got a contract to write three books with Hachette, and I’m still teaching about half the week now, so I’ve dropped down a bit. I’ve been teaching a long time, I’m 58 now, so I’ve been at it quite a while, but I think you need a little bit of time off to do it! My children have grown up so I don’t have the child care responsibilities that I did years ago, but everyone’s different.

I’m a person who has ideas and inspiration, but it takes me a lot to pin something down. I don’t have a flow methodical way of writing. Writing a paragraph, sitting down and doing that is something I really have to really put a lot of energy into. 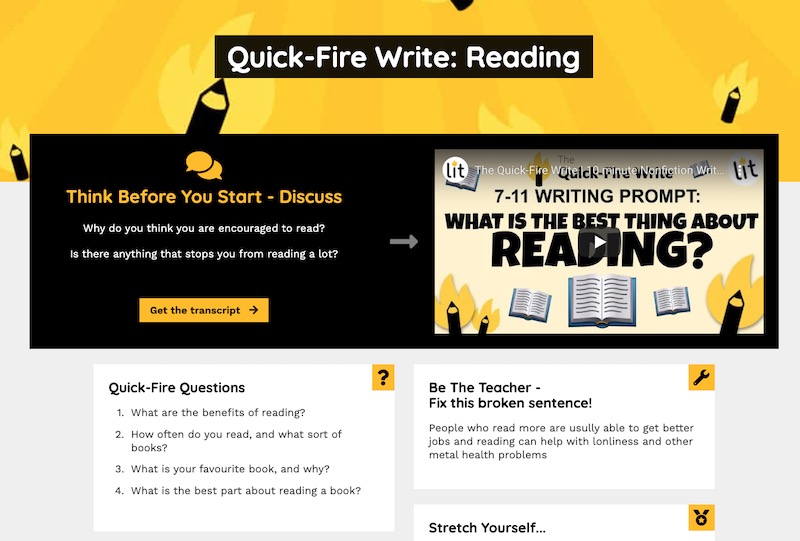 If you’d like to think more about reading with your class, check out this Quick-Fire Write activity!

Tim: Jay, why did you decide your debut novel to be about superheroes?

Jay: I think powers are quite interesting! I used to love comics as a boy. I grew up in the golden age of Marvel comics. What I used to like about comics, though, wasn’t really the real great superpowers. I used to like the little things like Superman heating up his soup with his hero vision or wondering how he cut his hair if he’s indestructible? How does he cut his fingernails? It would be those parts of life that always interested me. So when I wrote, it was less about finding the powers of being a huge advantage – in some respects they’re a disadvantage to trying to make your life work!

When you write novels based on escapism, this fictional universe, there’s a real open playing field to play with ideas. The world really is your oyster. A lot of people find that freeing and particularly children – their ideas are flowing aren’t they? When you say ‘let’s talk about superheroes and what kind of powers you can have’, that’s something you often won’t find like a creative block on really!

Tim: You also include a lot of mystery in your writing, why did you choose that to be the case?

Jay: That’s like a huge hook at the start. I think it’s a lot of suspense – going back to comic books, they always jumped around a bit. If you start off on your February issue, in your May issue you’d find out why that early hook was important. You find the same things in a lot of TV serials. You have very early seeds, why is that important? It comes out a bit later. I wanted to keep that going.

Tim: How do you want the book to make people feel?

Jay: I want them to laugh, that’s it! It’s a comedy, it’s just there to make you laugh. There are a lot of funny scenes. My humour comes mostly from character, and it is for there are some funny scenes in it and hopefully it’ll make people laugh.

Tim: Fantastic, thank you so much for joining us Jay!