At A Tale Unfolds, all of us on the front line are primary teachers. Obviously, we all believe in ATU 110% so it’s hard sometimes to come across as anything but biased. Enter Rachel Preece Dawson. She was one of the first ever teachers to take the leap of faith and trial our very first resource, The Temple Of Boom. Here’s her assessment of how it went.

It’s long been apparent to me that children produce higher quality writing when they are engaged with the context. It’s also pretty obvious that, if the context is a real-life one with a tangible purpose and real audience, their engagement will be even higher. These ideas are, to me, inextricably linked: engaging context plus real audience equals high quality end result.

So why do so many pieces of writing never see the light of day outside of the classroom? We make class books of poems that sit in the reading corner; we make e-safety leaflets and compilations of non-chronological reports, but seldom are they read by anyone other the children themselves.

Welcome to A Tale Unfolds.

I stumbled over the project on Twitter, and from the moment we started our first lesson my class were hooked. I teach in a mixed Y4/5/6 class and so the spread of abilities is clearly a large one. Engaging children over the age range can be tricky too: what appeals to a Y4 does not always appeal to a Y6 and vice versa. Squashing in all the new National Curriculum objectives for three year groups is also a challenge in a mixed-age class. The projects address all of these problems, and more.

The beauty of the planning which comes with The Temple of Boom (the first project), is that it is detailed enough to pick up and run with, but flexible enough to adapt and differentiate. There were some lessons where I picked up the planning the night before, checked out the video clips and IWB files and simply followed it word for word. How often can you say you ‘planned’ a lesson in a few minutes?!

There were some lessons where I took what was provided and shaped it to fit my class’ next steps in terms of grammar, punctuation or sentence level work – again; my planning time was reduced dramatically. From the outset, levels of engagement (mine and the children’s) were high, and we felt driven by a sense of purpose that we were all working together to produce a shared final outcome that would be seen by parents. 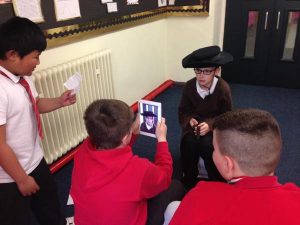 So how does A Tale Unfolds work? In the first project, we are introduced to Cindy, Ann and Bones, three detectives who receive a letter describing a mission that will take them on adventures limited only by the children’s imaginations. Remember those ‘Choose Your Own Adventure’ books? It’s a bit like that, only way more fun and with added technology.

Don’t let the technology put you off – all you need is an iPad or simple camcorder and access to easy to use software such as iMovie to stitch all your video clips together. The technology can be as simple or as whizzy as you are comfortable with. My first film, in terms of how the technology was used, was a bit basic, but our second project is well on the way to being amazing!

So what do you get? The projects are well structured, incredibly well thought-out resources comprising video clips, lesson plans, project overviews and paper-based writing frames. The children watch the video clips each week and then write a section of the film in different genres (letters, recounts, diary entries etc.). The clever part is the collaboration: there are individual, paired and group writing tasks which all weave together to create one final, collaborative film. Children vote on choices along the way and add in their own twists and turns as they go. 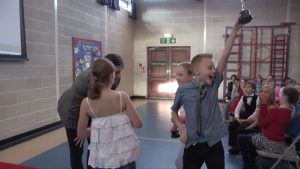 The whole project culminates in one amazing adventure film, which all the children have ownership of and have been included in. An awards ceremony is easy to organise and provides a real audience for the children’s work.

The impact on writers and writing in my class was enormous: reluctant writers were heard to ask if they could carry on through break and lunchtimes; all children could access the same learning and had a voice in decision making and roles to play in the film; progress in terms of levels was astounding during the film project: I had children making 2 and 3 APS points progress over the 7 weeks. I put this mainly down to engagement and ownership.

A Tale Unfolds impacts positively on achievement and progress; it eases workload and is easy to adapt and personalise. However, the acid test for me comes from the children themselves. When I announced that we were to be a pilot for the new project and the children saw Sam on screen announcing the new film, the cheer was so loud it almost took the roof off! What more can I ask of a teaching resource?